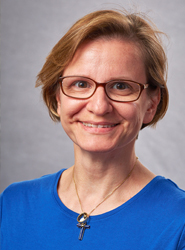 Francesca was born and raised in Firenze, Italy, and moved to the States in 1999 becoming a naturalized American citizen in 2005. She earned a B.A and M.A in Italian Language and Literature with double major in Musicology and Performing Arts from the Università degli Studi di Firenze, Italy in 1996. She also earned a MSW at the Catholic University of America in Washington, DC in 2005.

She has taught since the early 90’s students both in Italy and in the USA at the Inlingua School of Languages in Washington D.C., where she taught Italian language and culture to government and corporate employees as they prepared for their work assignments in Italy. She then moved to Knoxville, TN where she taught Italian at the Foreign Language Academy 2012-2016 and also provided services as translator. She has been teaching at the University of Tennessee for almost 8 years, where she started as a part-time Lecturer in 2012, and became full time Lecturer in the Fall of 2018.  In Spring 2014 she directed her Italian 112 students in a 15 minute mini play inspired by Commedia dell’ Arte Italiana, called: Arlecchino a UT, which she wrote for them in the occasion of an Italian Program Festival at the International House on campus. Her colleagues also had students perform skits and play games at this event. She also contributed to the Italian program by helping organize other similar activities for the students of Italian since 2012. In fact, in 2018 she led the Italian soccer team to participate and ultimately win the annual MFLL Soccer Tournament. Also, in 2019 she co-organized the annual MFLL Talent Show and led her Italian students to a third place finish with a short play called: A.M.I.C.I. which she wrote and directed. Currently, Francesca is serving in her first year position as Vice President of the NTTF Association. She is also drafting a proposal for an online course on Italian pronunciation and reading skills.

Francesca also has good understanding of French and Spanish languages.

In the early 90’s Francesca participated in Italian community theatre plays as an actress and choreographer, and is still interested in voice performances as voice over actress and especially as singer. She participated in the 2018 Women Jazz Jam Festival led by Kelli Jolly and she continues to sing in church and perform when she has the opportunity. She also enjoys writing and has published an article in the theatre program of an evening dedicated to George Gershwin in the TEATRO CEL of Livorno, Italy in 1997. The article was called: George Gershwin – A Musical Kaleidoscope, a short essay on his opera Blue Monday.

The flagship campus of the University of Tennessee System and partner in the Tennessee Transfer Pathway.